The Walking Dead: March To War

APP STORE SUMMARY
THE WALKING DEAD: MARCH TO WAR is currently available in English, Spanish, French, and German. Other languages, including Russian, Japanese, Korean, and Chinese are coming soon.

THE WALKING DEAD: MARCH TO WAR is an all-new intense multiplayer strategy game set in the world of the beloved The Walking Dead comics by Robert Kirkman.

Players are survivors in the ruins of the nation’s capital now overrun by the dead. Potential allies and enemies lurk around every corner. Real-time competitive play and a shared need for crucial resources drive players to cooperate with and compete against each other in an all-out war for survival.

Set concurrent with the “March to War” storyline in the comics, players will encounter familiar faces from The Walking Dead as they build increasingly powerful bases, recruit and train survivors, form Communities, and capture familiar Landmarks in the shattered remains of Washington, D.C.

Find safe ground and start building. Grow your base to produce more resources, recruit more survivors and expand your power base—but be careful: the more you have, the more your enemies can steal!

Every survivor NPC you recruit has their own name and backstory. As they gain experience and training, you will be able to customize their abilities, tailoring your group of survivors to your specific strategy. Of course, this makes it hurt even more when not everyone survives an enemy attack or a Walker Swarm!

Complete daily missions to unlock powerful and familiar Council members who can help guide you on your way to deciding what kind of leader to become. Do you inspire like Rick? Mentor like Hershel? Or do you carry a big stick like Negan? Only you can decide.

Find other players you can trust for added protection and cooperative gameplay. Work with your community to clear dangerous Walker Swarms for huge rewards, or just team up with the strongest fighters and wipe other players off the map!

Along with your community, take control of familiar Landmarks in the Washington, D.C. area. The bigger the Landmark, the more valuable it is, and the more likely to be targeted by other Communities. How long can you hold the Pentagon? Alexandria? The White House? The Kingdom?

ABOVE ALL ELSE, STAY ALIVE

The action in this game never stops. Be strong. Be smart. Stay alive, if you can. 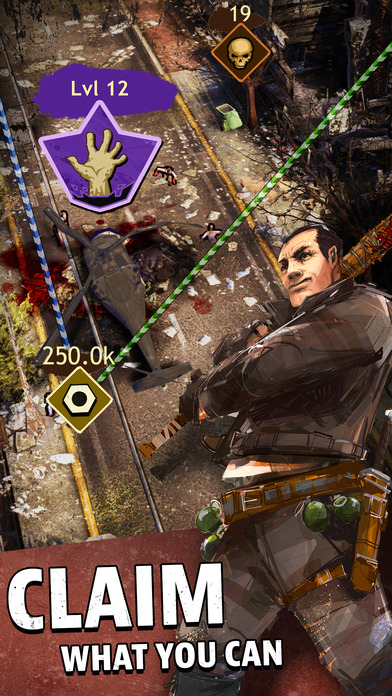