During the dark age of Malacca , the King rules his people with a rode of iron!

Follow Jebat, a fierce warrior with the soul of Amok, in his fight across the country seek revenge on the King and his henchmen.

Amok is a 2D beat-them-all game, in which you play as an ultra powerful warrior, Jebat, mighty Damak or the mysterious Teja, a woman who has decided to accompany him in his fight. Faces hordes of enemies and bosses all with their own capacities and learn how to master the power of Amok that lies inside you to put down the King’s tyranny.

FEATURES
- Many skills and abilities to slash your enemies into pieces!
- 3 Different characters with different skills
- 10 different environments
- Multiple enemies all with its own abilities
- 5 unique powerful bosses
- 32 stages on non-stop actions.

【ROTO - A Neat, Simple and Rotating Circular Puzzle】 The most challenging simplistic one-touch puzzle.
【Amok】 Assemble the ultimate force of heroes to save the Sultanate.
【Xcite Montain Bike】Get sick of running? If so grab a bike and ride it into a new excite adventure.
【Adam Dream】The exciting and challenging puzzles in Adam Dream will blow your mind!

To add a Qi badge for Amok - The Villain Heroes to your site: 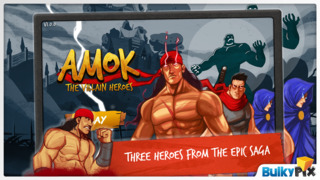