The World Ends with You: Solo Remix

Square Enix's fresh-faced hit The New York Times called “one of the best role playing games ever designed for anything” has busted onto iOS in a big way, with a slick and addictive new combat system, eye-popping HD art, and (of course) plenty of zetta awesome reasons for longtime fans to double dip.

Arm yourself with psychic superpowers and battle your way through a 7-day gauntlet of action: the Reaper’s Game.

A boy named Neku wakes up in a crowded intersection, alone and unaware of how he got there. Then, he receives a weird text: “Clear this mission...or face erasure.” With that, Neku is thrust into a life-or-death Game that sends him scrambling down streets paved with one riddle after another...

What is the Reaper’s Game? Why is Neku a Player, and what is he playing for? Will the Game really end if he survives all 7 days? Another mystery is always around the corner.

- Deep replay value
Finish the main story to unlock a hilarious bonus chapter, more quests and items to find, new combat challenges, and secret reports that flesh out the story even more.

- Explore a living, breathing city
Neku’s sprawling world is based on the real-life Shibuya in Tokyo. Visit real locations and absorb some real Japanese culture through a hip fantasy lens.

- Redrawn art and Retina display support
Enjoy the game in full HD on your Retina-enabled iPhone 4 or later device. Art and animation across the game has been redrawn just for this release, making combat a beautiful experience. This is how all 2D classics should look.

“A compelling risk/reward system that...amply blesses the daring” – 1UP

“Games rarely have things this interesting to say” – G4TV

To add a Qi badge for The World Ends with You: Solo Remix to your site: 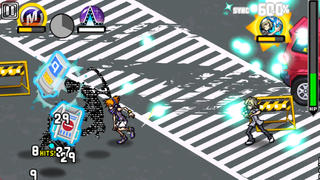