Showing app details for iPHONEiPAD
There are no reviews for this item.

APP STORE SUMMARY
Can you own the game?
Can you control the pitch with one touch? Use your vision and destroy a defense with one pass?
Can you earn the ultimate respect from Nani and Van Persie on your way to the final?

Gear up. Take the new adipower Predator from the pitch to your smartphone and master every curve, every lob, to deliver that killer pass to your striker. It won't be easy, you'll have to take on defenders, ignore the pressure and find the space. In the new game by the creators of the legendary Flick Kick you rule the midfield:

• Show what a Predator can do, with an arsenal of passes, assists and counter-attacks.

• Split defenses in two with amazing curls and lob shots.

• Go one-touch genius and do your magic to set the goal.

• Master the 12 levels, from practice to full football action. 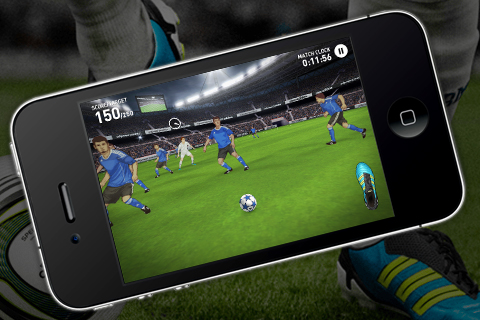