So … you want to be a fighter? UFC® Undisputed™ 2010 is the only mixed martial arts (MMA) videogame that delivers the action, intensity and prestige of the Ultimate Fighting Championship® (UFC). Step into a simplified virtual handheld Octagon™ on the iPhone and iPad to experience fast-paced and fun MMA action with more than 25 of the best UFC fighters in the world. Experience unique and intelligent combat, competitive gameplay modes, extensive connectivity options and access to the latest happenings in the UFC world. UFC Undisputed 2010 embodies the ultimate essence and supremacy of a UFC fighter. Ready to be one?

•HANDHELD FIGHTING EXPERIENCE – Explore UFC Undisputed 2010’s simplified interface on the iPhone and iPad, including swipes on the touch screen to execute punches, kicks, takedowns and more. Quick and fun puzzle paths are implemented for players to escape submissions.
•UFC FIGHTERS – Navigate a roster of more than 25 prolific UFC fighters from all five of UFC’s official weight classes, each with an authentic appearance.
•EXHIBITION MODE – Choose from any two fighters in the same weight class and compete in a quick-play single match.
•TOURNAMENT MODE – Select a fighter and compete to win a Championship by defeating all other opponents in the fighter’s respective weight class.
•LEADERBOARD SYSTEM – Compare fight results with other players to determine leaders in wins by knockout, submission or decision.
•SOCIAL NETWORKING CONNECTIVITY – Share game progress and achievements with friends through Facebook and Twitter connectivity.
•UFC PORTAL – Stay up to date with UFC through the latest news and information on upcoming events, access to fighter profiles and PPV predictions, as well as an active UFC ticker filled with updates.


Available on iPad in HD

To add a Qi badge for UFC® Undisputed™ to your site: 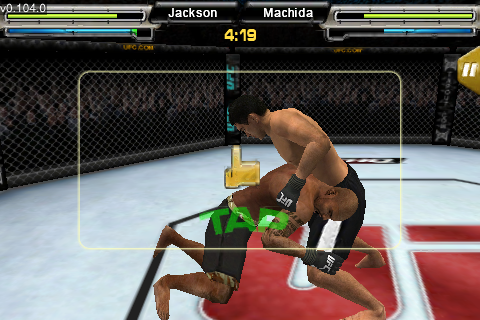