Attack of the Kraken LITE

Showing app details for iPHONE
There are no reviews for this item.

APP STORE SUMMARY
Battle across the earth and into outer space and beyond in this unique and epic retro style 2D shooter from Quantum Sheep!


"Over a period of several days, the Meteors fell, landing in the Earth's deep oceans. Unbeknownst to humanity, the invasion had already started..."

Features:
*Inspired by classic games such as Attack of the Mutant Camels, Defender and Time Pilot, as well as John Wyndham's classic novel 'The Kraken Wakes'
*4 beautifully drawn levels to battle in
* Varied enemy types
*Pilot the experimental Titan Rocket across four different environments
*Innovative scoring system - the better your shield strength, the more points-per-hit you get!
*Destroy an enemy with maximum shields to get a perfect kill!
*Epic Soundtrack by Kevin Macleod
*Two control methods to choose from, with controllable opacity
*Check out the sneak peek video here:
http://www.youtube.com/watch?v=LqNDLkTnhwY

Take control of the experimental Titan Rocket ship and battle against the huge Kraken as they rise from the oceans and make their way across land, threatening all before them!

It's up to you to fight back against the alien menace! Can you save the world and defeat the Kraken Queen on her homeworld?

The Kraken themselves are huge monstrosities, armed with homing missiles. Can you survive their relentless march towards their targets? Can you stop them?

As well as Kraken there are also UFOs to deal with, that perform different functions.


The scoring system is tied to your shields:

Additionally, destroying an enemy while your shields are at Max gets you a 'Perfect Kill' for that enemy.

If you enjoyed this LITE version of Attack of the Kraken, why not try the full version, which features:

*16 beautifully drawn levels to battle in
*More than 10 different enemy types, including five UFO variants and four huge Kraken!
*Pilot the experimental Titan Rocket across seven different environments, including cityscapes and outer space!
*Innovative scoring system - the better your shield strength, the more points-per-hit you get!
*Destroy an enemy with maximum shields to get a perfect kill!
*Research - Perfect Kills add research points against an enemy type. Fully researched enemies are easier to kill!
*Perfect for quick goes or longer play sessions - play a level to try and gain research points, or take the whole game on at once!
*A compelling narrative that propels the action forward
*Look out for sci-fi references scattered around the levels
*Two difficulty levels - play on hard for double the points and harder and faster enemies, but with only three lives instead of five!
*Epic Soundtrack by Kevin Macleod
*Two control methods to choose from, with controllable opacity
*No iAds

Each Perfect Kill adds to your research, and a fully researched enemy will be easier to kill, as well as possibly stopping a certain trait (i.e. the jammer UFOs would no longer be able to disrupt your radar).

The action can get pretty intense, and I think it's a lot of fun, and I hope you guys like it! 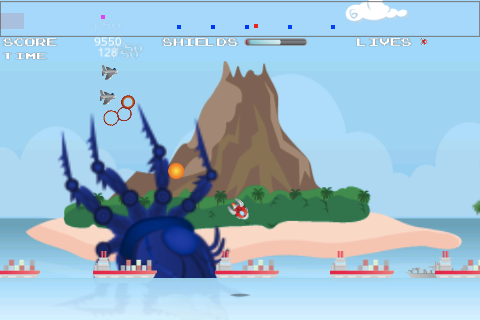