Showing app details for iPHONE
There are no reviews for this item.

Story:
They're Breaking through!!!
You've had a great idea for a game, but, inevitably, all software is riddled with Bugs...

The code is under attack, and it's up to you to protect it!

How to Play:
Move Left and Right using the left and right buttons at the edges of the screen.

Touch the central play area to alternate between the horizontal firewall and vertical shots.

Your ship at the bottom of the screen, "The Debugger", auto-fires and cannot be destroyed.

Time Attack:
Shoot as many bugs as you can in six minutes!
The timer counts down at the bottom of the screen.
Destroying a string of enemies will increase your Score Multiplier (The 'M' in the top right of the screen).
If a bug gets past you, the multiplier is decreased by one.
Keep the multiplier high to get a high score!

Debug (story mode):
Play through four levels to reach the release stage with as few bugs as possible. At the top of the screen is the amount of damage the bugs are doing to your code. Reduce this to zero by shooting bugs.
At the bottom of the screen is the number of bugs that have got past you, and the limit (maximum amount of bugs you can let through without losing the game).
Shoot as many bugs as you can to stop the bug limit being reached.


Toyz:
A little distraction thrown in as an extra.
*Bang the Bugs to make drum sounds.
*Watch the code in 'code drops'. 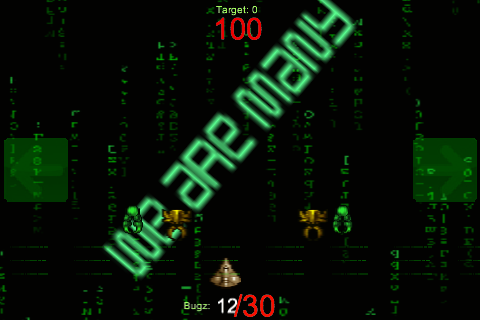